The concert was professionally recorded (“It’s Over” appears on the Roy Orbison box set “The Soul of Rock and Roll”) and the whole show is via Itunes as “Roy Orbison: The Last Concert.”
Exhausted, he returned to his home in Hendersonville, Tennessee to rest for several days before flying again to London to film two videos with supergroup The Traveling Wilburys. On December 6th, he spent the day flying model airplanes with his sons, then after having dinner at his mother’s home in Hendersonville he died of a heart attack at the age of 52.
Although many people thought he was blind because of his trademark sunglasses, Roy Orbison was not blind. He did suffer from eye weakness but could see rather well in certain lighting conditions. He did however suffer from more major health concerns. High blood pressure and heart concerns had led to by-pass surgery and he began a new diet and workout regimen, but speculation exists as to whether his weight loss was enough to cause his premature demise. Orbison addressed his health concerns during his last interview sessions for rolling Stone magazine. Here’s an excerpt:
“I had blockage of ninety percent, seventy percent and sixty percent. So they said, “We’ll take care of it,” and I said, “We’ll, leave me a nice scar, then.” And it came out terrific. And it’s still terrific. My doctor here said it’s the best work he’s ever seen.
HAD YOU JUST GOTTEN OUT OF SHAPE?
Well, it’s the life of rock & roll that takes its toll. Always traveling and playing, and then trying to get rest. And no workouts in between, and eating road food. Like in the Traveling Wilburys song, ‘Dirty World,’ ‘I love your quest for junk food’ [laughs]. So it was that, I think, and probably stress. The doctor said, “I don’t care what you do, just don’t worry about anything. If there comes an obstacle in your life, either move it or go around it.”
DO YOU FEEL HEALTHY NOW?
Yeah, yeah. Having lost a little weight, and my blood pressure’s right with the diet. ‘The diet’ not meaning a restricted food intake, but the proper food. And working out here with the trainer from time to time. Everything’s terrific. Couldn’t be better.
On December 6th, he spent the day flying model airplanes with his sons and ate dinner at his mother’s home in Hendersonville. Later that day, he died of a heart attack, at the age of 52 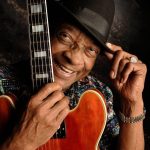