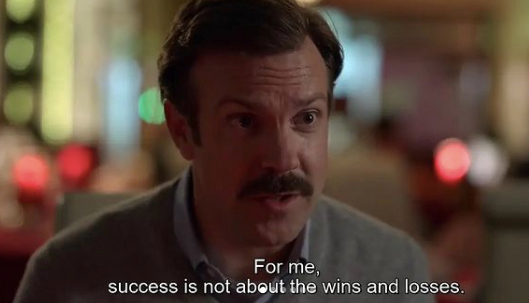 Ted Lasso, an American football coach, receives an offer from England. He takes over the AFC Richmond team and things develop. It has a warm story with what it has lived through since its arrival. Here we listed best Ted Lasso Quotes from the Apple tv show.

1- “I shouldn’t bring an umbrella to a brainstorm.” -Ted Lasso

3- “Taking on a challenge is a lot like riding a horse, isn’t it? If you’re comfortable while you’re doing it, you’re probably doing it wrong.” -Ted Lasso

4- “Coach, I got a feeling we’re not in Kansas anymore.” -Ted Lasso

5- “I promise you there is something worse out there than being sad, and that’s being alone and being sad.” -Ted Lasso

9- “I always thought tea was going to taste like hot brown water. And do you know what? I was right.” -Ted Lasso

10- “You could fill two internets with what I don’t know about football.” -Ted Lasso

11- “Every disadvantage has its advantage.” -Ted Lasso

12- “I do love a locker room. It smells like potential.” -Ted Lasso

14- “If the internet has taught us anything, it’s that sometimes it’s easier to speak our minds anonymously.” -Ted Lasso

15- “As the man once said, the harder you work, the luckier you get.” -Ted Lasso

17- “A palace made out of crystal seems mighty fragile to me.” -Ted Lasso

18- “I think that you might be so sure that you’re one in a million, that sometimes you forget that out there you’re just one in 11.” -Ted Lasso

19- “This woman is strong, confident, and powerful. Boss, I tell you, I’d hate to see you and Michelle Obama arm wrestle, but I wouldn’t be able take my eyes off of it either.” -Ted Lasso

20- “Sam was more open than the jar of peanut butter on my counter.” -Ted Lasso

21- “Little tip for y’all. Fries are called chips. Chips are called crisps. And bangers aren’t great songs, but they do make you feel like dancing because they’re so darn tasty.” -Ted Lasso

23- “I feel like we fell out of the lucky tree and hit every branch on the way down, ended up in a pool of cash and Sour Patch Kids.” -Ted Lasso

24- “You beating yourself up is like Woody Allen playing the clarinet. I don’t want to hear it.” -Ted Lasso

25- “It’s just a group of people who care, Roy. Not unlike folks at a hip-hop concert whose hands are not in the air.” -Ted Lasso

26- “If you care about someone, and you got a little love in your heart, there ain’t nothing you can’t get through together.” -Ted Lasso

27- “Your body is like day-old rice. If it ain’t warmed up properly, something real bad could happen.” -Ted Lasso

28- “What do you say we do what the man says and make today our masterpiece?” -Ted Lasso

29- “I believe in communism. Rom-communism, that is.” -Ted Lasso