OCTOBER 25, 1992 – Grammy Award winning singer/songwriter/musician/actor **ROGER MILLER **(b January 2, 1936 in Fort Worth, Texas) died of cancer at age 56 at the Century City Hospital in Los Angeles.
It was in the fall of 1991 that Miller found out he had a form of lung cancer. His last performance was during CMA week in Nashville. Publicly, he refused to let his illness faze him. After a year of treatment and one remission. A week after his death, his wife Mary held a memorial service for him at a place he held so close to his heart, the Ryman Auditorium in Nashville. Mary wanted the memorial to be a celebration of his life. Hundreds of relatives and friends, many of whom had known him when he was still the Singing Bellhop, squeezed into the Ryman to tell their favorite Roger Miller story and listen again to his music. It was a beautiful tribute to the man Roger was, and to the unique artist represented by this career retrospective. For if his music proves anything about Roger Miller, it’s that God made him equal parts laughter and soul.
Miller was born the youngest of three boys. His father Jean Miller died at the age of 26 from spinal meningitis when Roger was only a year old. It was during the depression and Roger’s mother, Laudene Holt Miller, was in her early 20’s. As she was unable to provide for the boys, three of her late husband’s brothers came and took one of the boys to live with them. Roger moved in with Armelia and Elmer Miller on a farm outside Erick, Oklahoma.
It was a difficult childhood. Most days were spent in the cotton fields picking cotton or working the land, and Roger never really accepted the separation of his family. He was lonely and unhappy, but his mind took him to places he could only dream about. Walking three miles to his one-room school each day, he started composing songs, the first of which allegedly went a little something like this:* “There’s a picture on the wall, It’s the dearest of them all, Mother.”*

Roger, of course, painted a somewhat more humorous and inventive picture of his school days.* “The school I went to had 37 students,” *he once said, “me and 36 Indians. One time we had a school dance and it rained for 36 days straight. During recess we used to play cowboy and Indians and things got pretty wild from my standpoint.”
Nevertheless, Roger, who also liked to tell people that he* “even flunked school bus,” *did let his humorous guard down now and then to comment on the insecure loner he truly seems to have been as a child. “We were dirt poor,” he once explained. “What I’d do is sit around and get warm by crawling inside myself and make up stuff… I was one of those kids that never had much to say and when I did it was wrong. I always wanted attention, always was reaching and grabbing for attention.”
Roger was a dreamer and his heart was never in picking cotton. Most days his daddy would catch him daydreaming.* “It’s really a good thing that he made it in the music business ’cause he would have starved to death as a farmer,”* said entertainer Sheb Wooley (1921-2003), an Erick native who married Roger’s cousin, Melva Laure Miller.
Fifteen years older than Roger, Wooley’s career would lead him to Hollywood and the movies. One of Wooley’s biggest hits was “The Purple People Eater.” In those days, Wooley and little Roger would ride out *”fixin fences, chasing steers and talking about stardom,” *Wooley recalls. The two would listen to the Grand Ole Opry on Saturday nights and the Light Crust Doughboys on Fort Worth radio by day. Miller came to idolize Bob Wills and Hank Williams, but it was Wooley who taught Roger his first chords on guitar, bought him his first fiddle, and who represented the very real world of show business that Roger wanted so much for himself.
Eager to follow in Wooley’s long tall footsteps while he was still in high school, Roger started running away, knocking around from town to town through Texas and Oklahoma. He took whatever work he could find by day and haunted the honky-tonks by night. His drifting came to an abrupt halt when he stole a guitar in Texas and crossed the state line back into Oklahoma. He had so desperately wanted a guitar to write songs on and this seemed the only way to get one, since picking cotton would never earn him the kind of money he needed for a guitar.
Roger turned himself in the next day and rather than put him in jail they offered to let him join the Army. Although he was only 17, he chose to go into the service. He was eager to be going someplace else and before long he was shipped to Korea, where he drove a jeep and earned one of his favorite one-liners,* “My education was Korea, Clash of 52.”*
Roger was terribly homesick, but his world was growing larger. Towards the end of his tour with the Army, he was sent to Fort McPherson in Atlanta. Assigned to Special Services, he played fiddle in the Circle A Wranglers, a well-known service outfit previously started by PFC Faron Young. 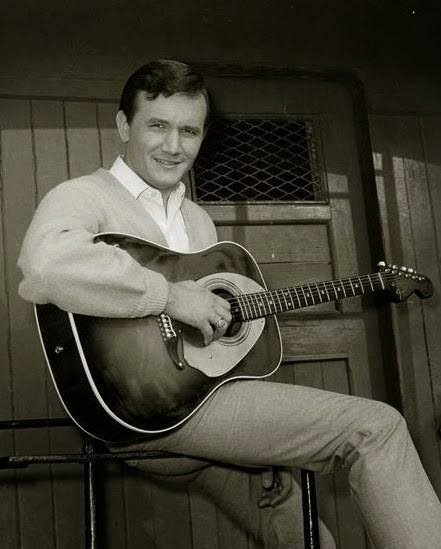