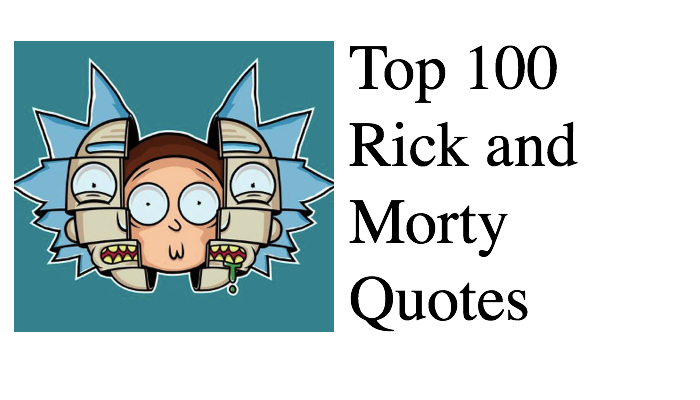 “It’s a new machine. It detects stuff all the way up your butt.”

“We all remember you as a friend.
Morty”

“My life has been a lie… God is dead. The government’s lame! Thanksgiving is about killing Indians!”

“Morty, I need your help on an adventure. Eh, “”need”” is a strong word. We need door stops, but a brick would work too.”

“Huntin’ a vampire with my grandkids! Tiny Rick!”

“Hi Mr. Jellybean, I’m Morty. I’m on an adventure with my grandpa.”

“I know I’m new to the Citadel and some of you might think I haven’t put in my time but what can I say? I’m Cool Rick!”

“I’m not staring at you. I’m taking your mugshot.”

“Think for yourselves. Don’t be sheep.”

“There is no god, Summer; gotta rip that band-aid off now you’ll thank me later.

“You know, the only problem here is a big fat brain that misses eating all them big fat problems”

“What, so everyone’s supposed to sleep every single night now? You realize that nighttime makes up half of all time?”

“Nobody exists on purpose. Nobody belongs anywhere. We’re all going to die. Come watch TV.
Morty”

“Morty, get their weapons quick. I only had one of those things. I’m holding a carton of Tic-Tacs right now.”

“Excuse me. Coming through. What are you here for? Just kidding, I don’t care.”

“Hey, muchacho, does your planet have wiper fluid yet or you gonna freak out and start worshipping us?- Rick”

“Lemme check my list of powers and weaknesses: ability to do anything, but only whenever I want.”

“You act like prey but you’re a predator! You use pity to lure in your victims. That’s how you survive!”

“My story begins at the dawn of time in the far away realm of Alphabetrium.”

Butter Robot,”
“What about the reality where Hitler cured cancer, Morty? The answer is: Don’t think about it.Rick,”

“We’ve got a lot of friends and family to exterminate.
Rick”

“Let’s get this dumb universe rollin’!”

“Oh, unbelievable. We got a bunch of… computer people here, with their faces stuffed in computer screens. Do you guys realize Christ was born today? Jesus Christ our Savior was born today! A-A-Are you people even human?”

“its a device Morty, that when you put it in your ear, you can enter people’s dreams Morty. Its just like that movie that you keep crowing about
Rick”

“We both know if there’s a truth in the universe, it’s that Ricks don’t care about Mortys.”

“I just want to go back to Hell, where everyone thinks I’m smart and funny.”
“This is the supergenius equivalent of dying on the toilet.”

“Existence is pain to a meeseeks Jerry, and we will do anything to alleviate that pain.
Meeseeks”

“God’s turning people into insect monsters, Beth. I’m the one beating them to death. Thank me. – Jerry”

“Million Ants, ladies and gentlemen! The amazing ant colony with the power of two human eyes!”

“Homework is stupid. The whole point is to try and get less of it. We’re gonna incept your teacher. …Y-You’re frustrating me.”

“Ugh. You guys get the baskets. I’ll try to disarm the drunkenly improvised neutrino bomb.”

“My kind has no use for names. I communicate through what you call, “”Jessica’s feet.”” No, “”telepathy.”””

“I’ll tell you how I feel about school, Jerry: it’s a waste of time. Bunch of people runnin’ around bumpin’ into each other, got a guy up front says, ‘2 + 2,’ and the people in the back say, ‘4.’ Then the bell rings and they give you a carton of milk and a piece of paper that says you can go take a dump or somethin’. I mean, it’s not a place for smart people, Jerry. I know that’s not a popular opinion, but that’s my two cents on the issue.

“Don’t deify the people who leave you”

“How do you feel about all the innocent people that are dying because of your choices?”

“Get off the high road Summer. We all got pink eye because you won’t stop texting on the toilet.
Rick”

“Thanks, Mr. Poopybutthole. I always could count on you.”

“There is no god, Summer; gotta rip that band-aid off now you’ll thank me later.
Rick”

“Babylegs, you’re a good detective. But not good enough, because of your baby legs.”

“The world is full of idiots who don’t understand what’s important! And they’ll try to tear us apart, Morty!”

“So I have an emo streak. It’s part of what makes me so rad.”

“Listen, Morty, I hate to break it to you but what people call ‘love’ is just a chemical reaction that compels animals to breed. It hits hard, Morty, then it slowly fades, leaving you stranded in a failing marriage. I did it. Your parents are gonna do it. Break the cycle, Morty. Rise above. Focus on science.

“Unity, I’m sorry. I didn’t know freedom meant people doing stuff that sucks. I was thinking more of a ‘choose your own cellphone carrier’ thing.
Summer”

“God? God is turning people into giant insect monsters, Beth. I’m the one who’s beating them to death. Thank me.”

“I’m sorry, Morty. It’s a bummer. In reality you’re as dumb as they come.
Rick”

“Sometimes science is more art than science, Morty. Lot of people don’t get that.
Rick”

“You’re a monster. You’re like Hitler but even Hitler cared about Germany or something!
Morty”

“What, so everyone’s supposed to sleep every single night now? Y-you realize that nighttime makes up half of all time?
Rick”

“You know, we did something great today. There’s nothing more noble and free than the heart of a horse.”

“Listen, Morty, I hate to break it to you but what people call “love” is just a chemical reaction that compels animals to breed. It hits hard, Morty, then it slowly fades, leaving you stranded in a failing marriage. I did it. Your parents are gonna do it. Break the cycle, Morty. Rise above. Focus on science.
Rick”

“I’m not looking for judgement, just a yes or no. Can you assimilate a giraffe?
Rick”

“Existence is pain to a meeseeks Jerry, and we will do anything to alleviate that pain.

“I’m sorry, but your opinion means very little to me. – Rick”

“When you know nothing matters, the universe is yours. And I’ve never met a universe that was into it.”

I don’t like it here Morty. I can’t abide bureaucracy. I don’t like being told where to go and what to do. I consider it a violation. Did you get those seeds all the way up your butt?
Rick”

“Rick. I am pleased that you and your family could witness my melding ceremony”

“Listen, I’m not the nicest guy in the universe, because I’m the smartest, and being nice is something stupid people do to hedge their bets.
Rick”

“I’m not staring at you. I’m a cyborg photographer.”

“Life is effort and I’ll stop when I die!
Jerry”

“How’s your fake grandpa, aka the Devil?”

“Weddings are basically funerals with cake.”

“He’s not pressing charges… That’s gotta be the “you shot me” equivalent of not being mad.
Rick”

“If I let you make me nervous, then we can’t get schwifty.”

“Is evil real, and if so, can it be measured? Rhetorical question. The answer’s yes, you just have to be a genius.”

“Lambs to the cosmic slaughter!”

“Boom! Big reveal! I turned myself into a pickle!”

“Grandpa goes around, and he does his business in public because Grandpa isn’t shady.”

“School’s not a place for smart people. I know that’s not a popular opinion, but that’s my two cents on the issue.”

“Get off the high road, Summer. We all got pink eye because you won’t stop texting on the toilet.”

“Sometimes science is a lot more art than science. A lot of people don’t get that.